Sala-manca’s Garage Sale | Solo (selling) Exhibition
Kfar Saba Municipal Gallery | Curator: Meira Perry-Lehmann |24.5-24.7
The last exhibition presented at the Kfar Saba City Gallery during the current school year is also the last show – for the time being – by the Jerusalem-based Sala-Manca Group, whose members, Lea Mauas and Diego Rotman, are about to travel to Canada, to study there for one year. The Sala-Manca Group, active for the past eighteen years, is known for subversive, independent, dynamic artistic creation in different fields: performance, video, installation, and new media. In 2009 Mauas and Rotman founded the Mamuta Art and Media Center, which offers creators in a variety of fields a framework for encounters, research and exhibition. The Center was first situated at the Jerusalem home of the artist Daniela Passal, and since 2013 has a space at Hansen House in the city. Over the years, Sala-Manca Group activities have taken place mainly in Jerusalem, only occasionally showing elsewhere.
The Sala-Manca Garage Sale at the gallery blurs and examines, as is the group’s wont, the fine line between art and life. It gives visitors an opportunity to buy objects that belong to the artists, and in doing so exposes elements of their personal lives. The sale – an ironic take both on art auctions and on garage sales when moving house – features different kinds of items: objects that had served as props in the group’s artworks; works of art or fragments thereof; and sundry items from the family home, whose emotional history is connected to the artists’ lives or works. The commercial aspect of the show accentuates the artists’ ambivalence toward the artistic establishment, including the art gallery. Rather than finished artworks, they seek to expose in the gallery the creative process, which in this case includes travel abroad which destabilizes their artistic and domestic space. The gallery is turned into the artists’ proverbial garage, where the display may be assembled or disassembled while on view.
All proceeds from the “garage sale” will be used to produce the next chapter in the “Argentinian-Israeli telenovela” The Story of Batya M, which the Sala-Manca Group created for the 2006 Bat Yam International Festival for Theater and Street Art. A telenovela is a genre of serial drama produced mainly in Latin America, characterized by melodramatic story lines that aim to evoke strong emotions in the viewer. Typically shorter than the soap opera of the English-speaking world, events in the telenovela are usually set within the span of a year or less, and are faster-paced. The first chapter of The Story of Batya M, which is 40 minutes long, was screened with live dubbing by the actors who portray the telenovela’s main protagonists – that is, the couple Mauas and Rotman, who comprise the Sala-Manca Group. Featured alongside them are their daughter, Ashu, friends, and other family members. The work straddles the gamut between live show and TV program, between mass communication culture and avant-garde performance, between melodrama and social commentary. By producing a sequel whose events take place seven years later the artists intend to turn the work into a slower, postmodern telenovela.
Meira Perry-Lehmann 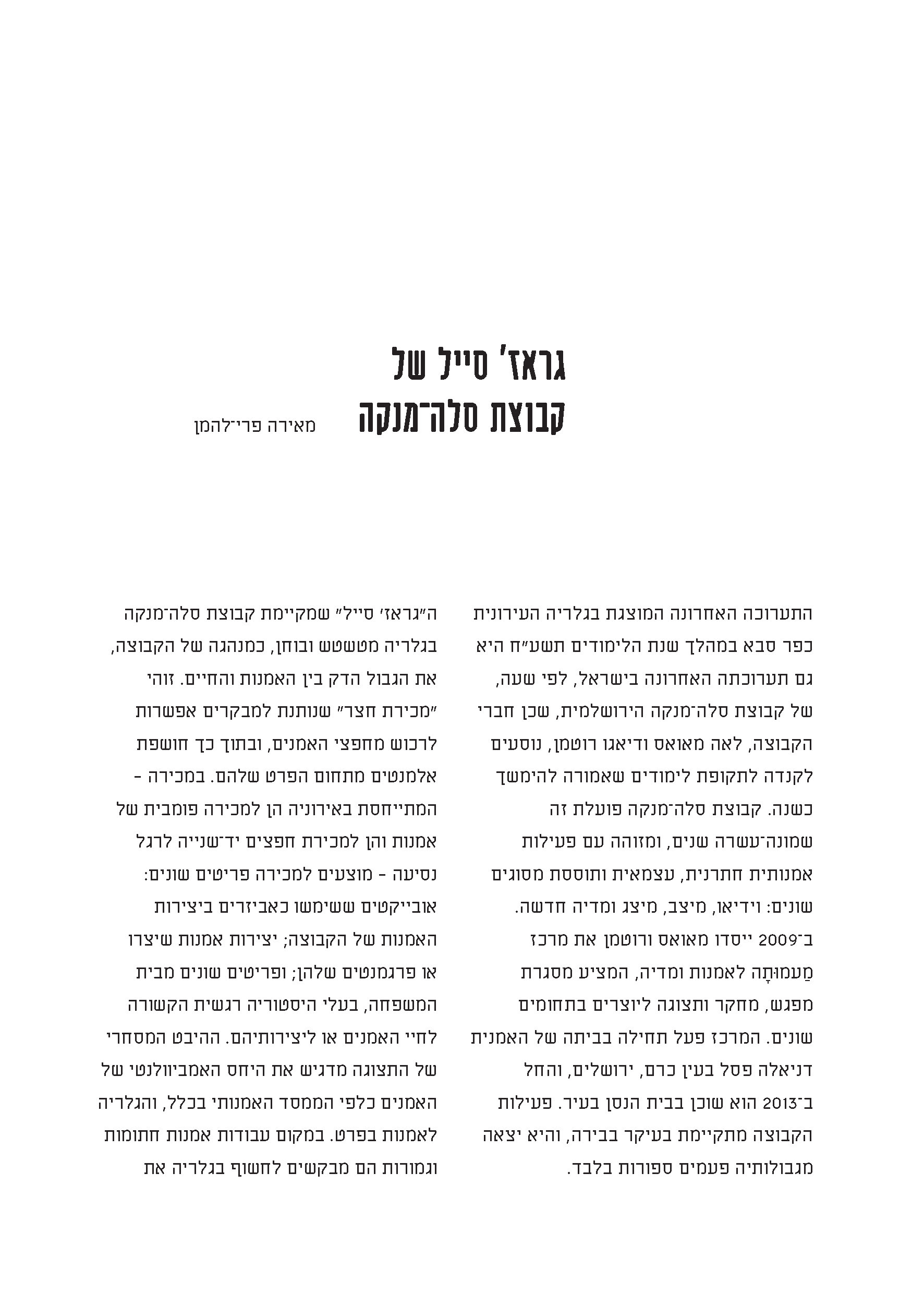 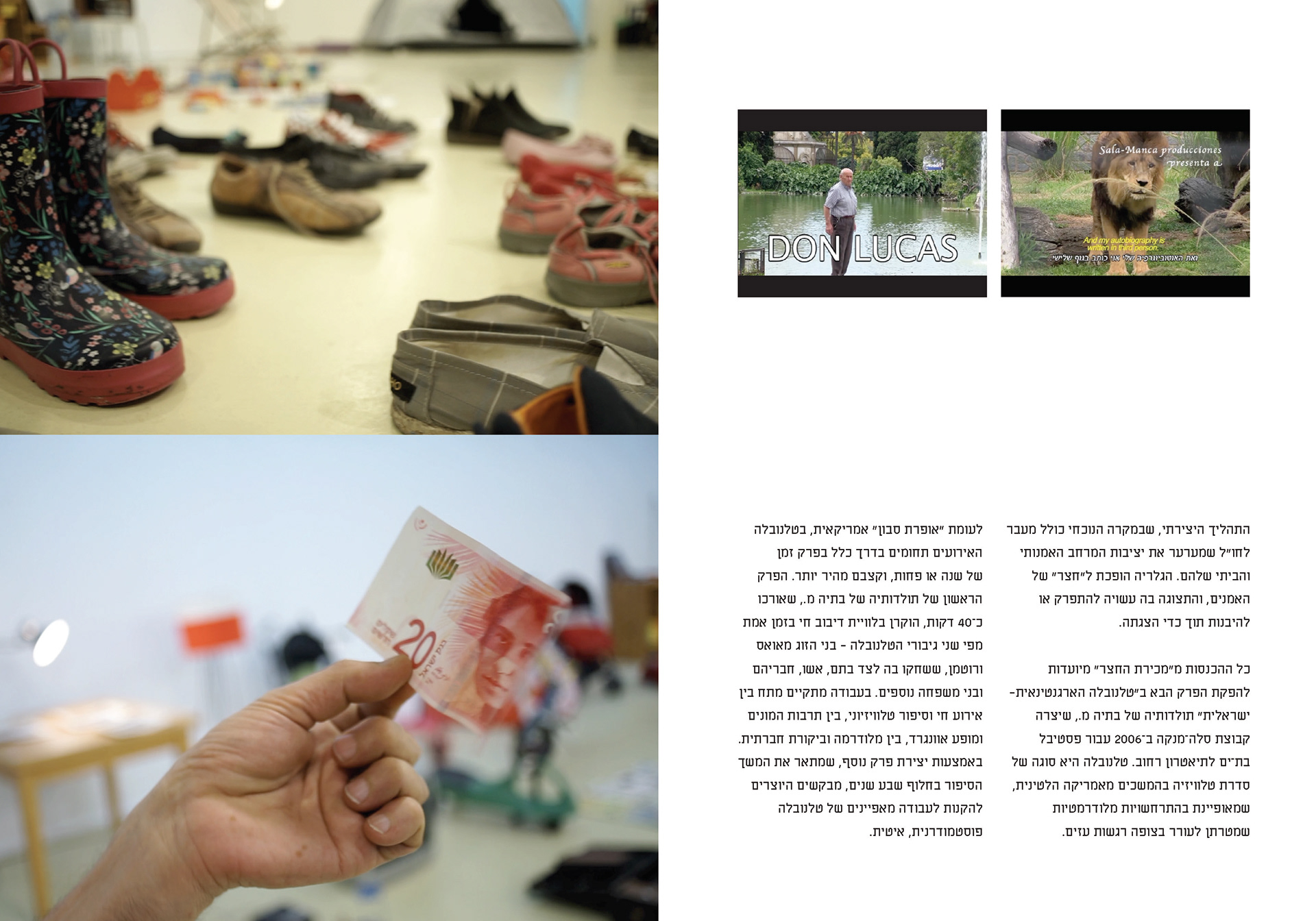 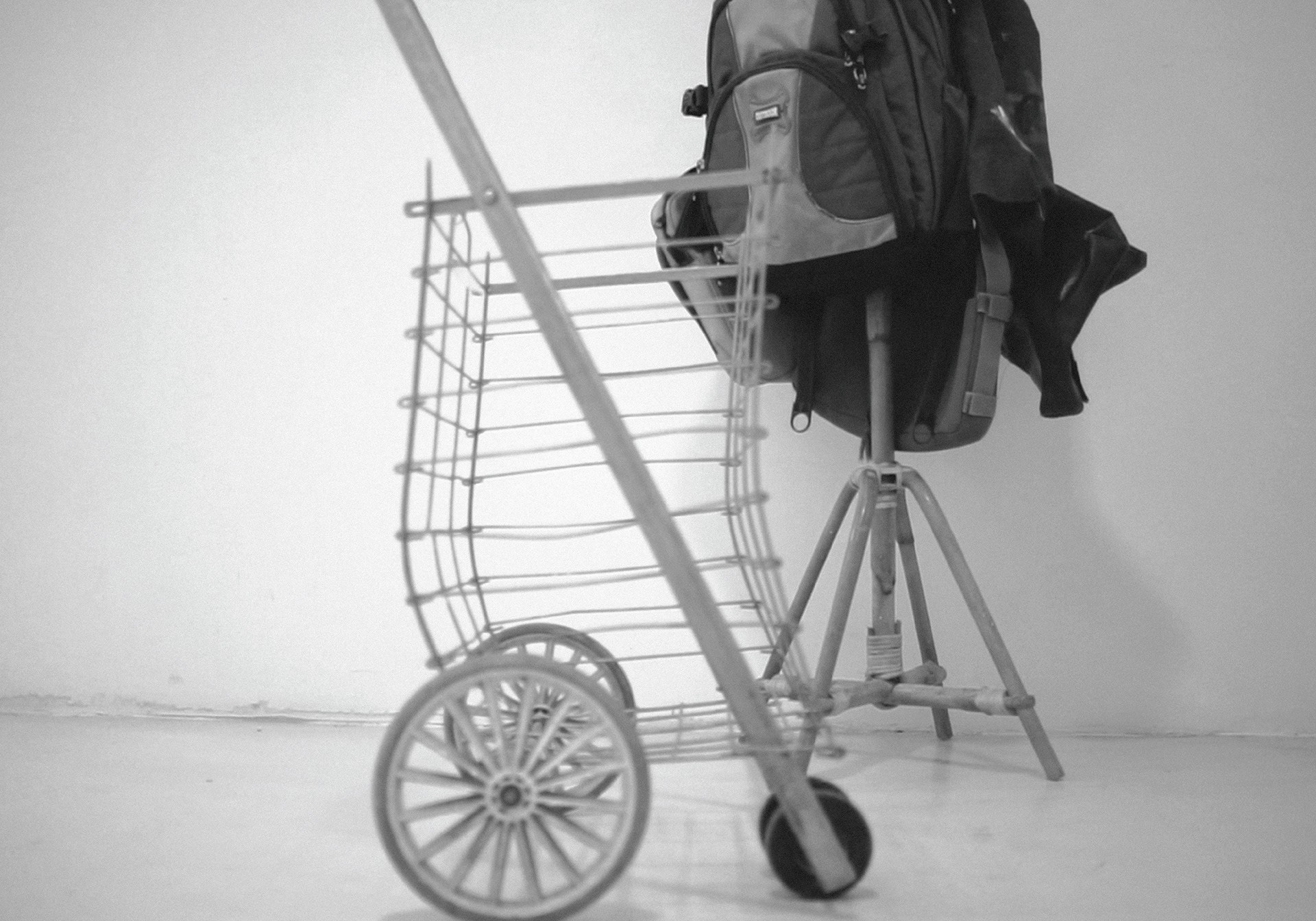 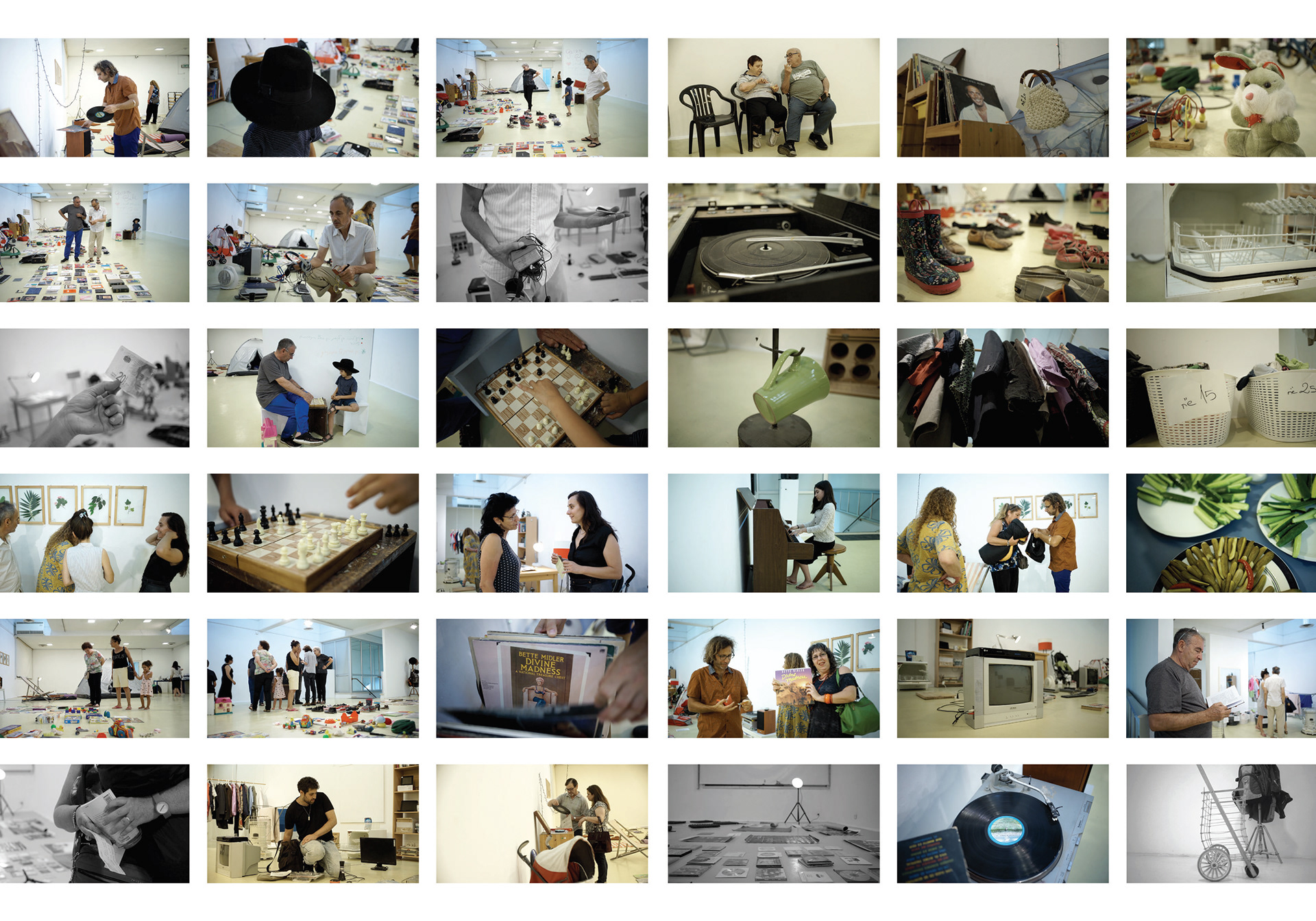 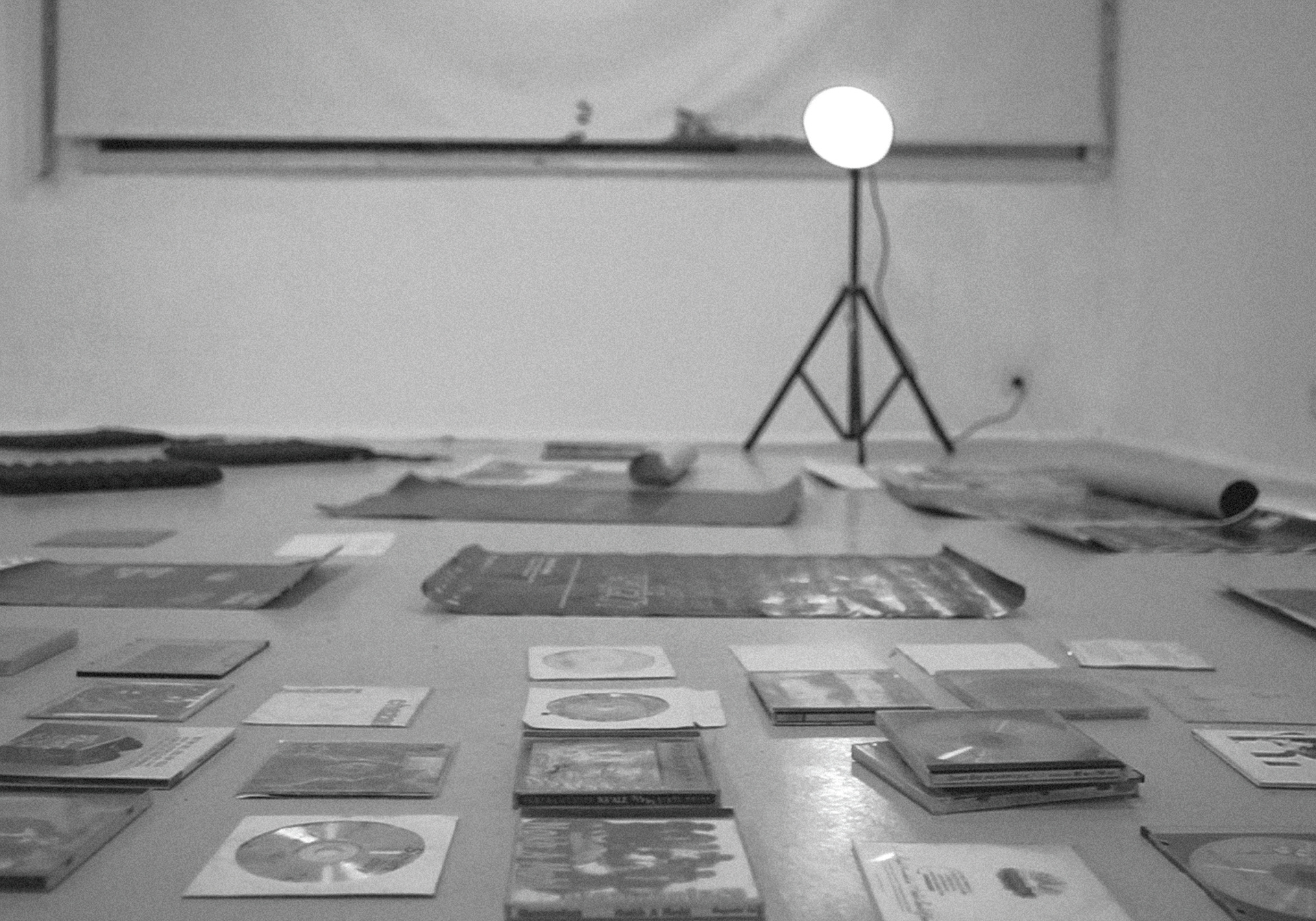 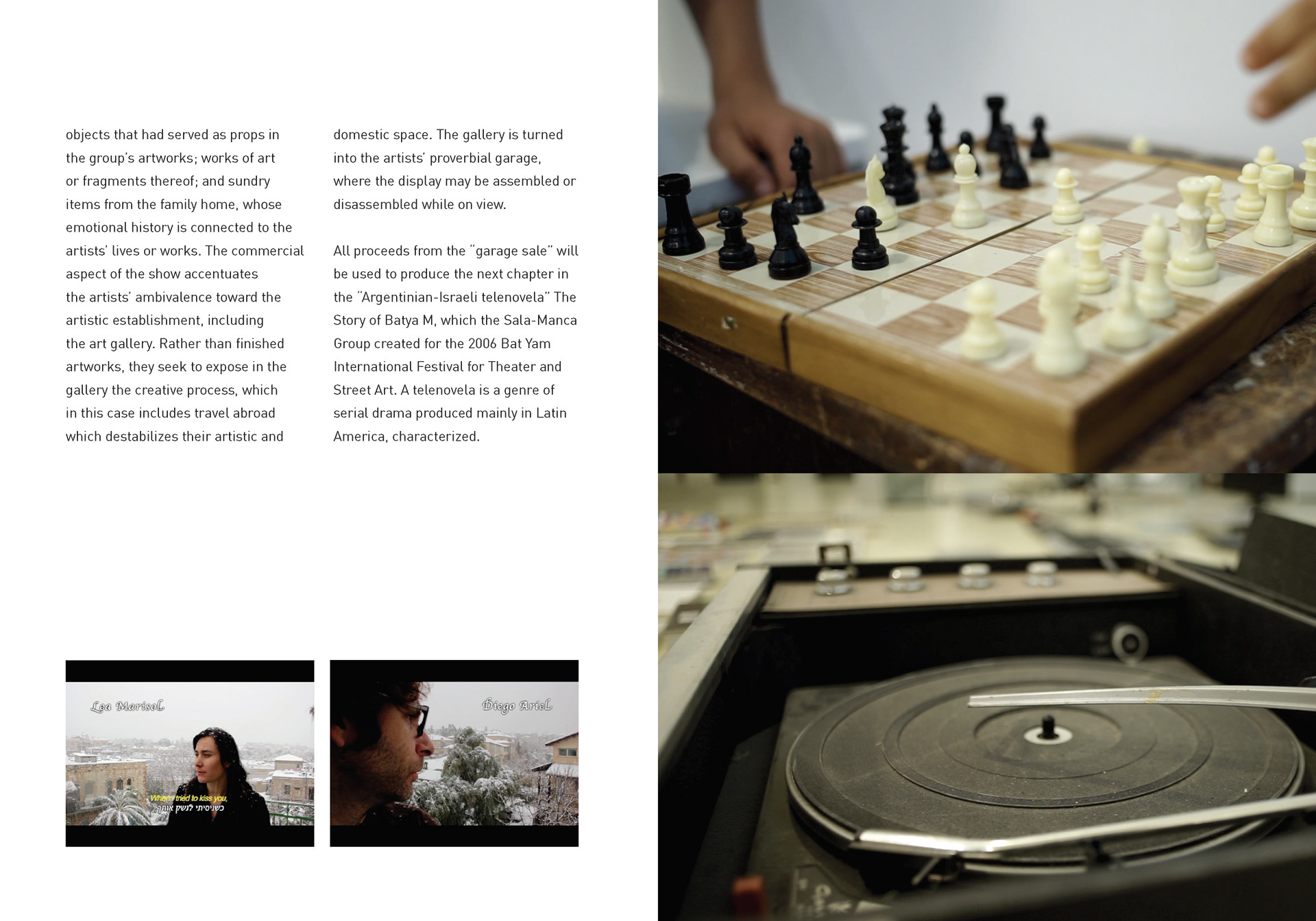 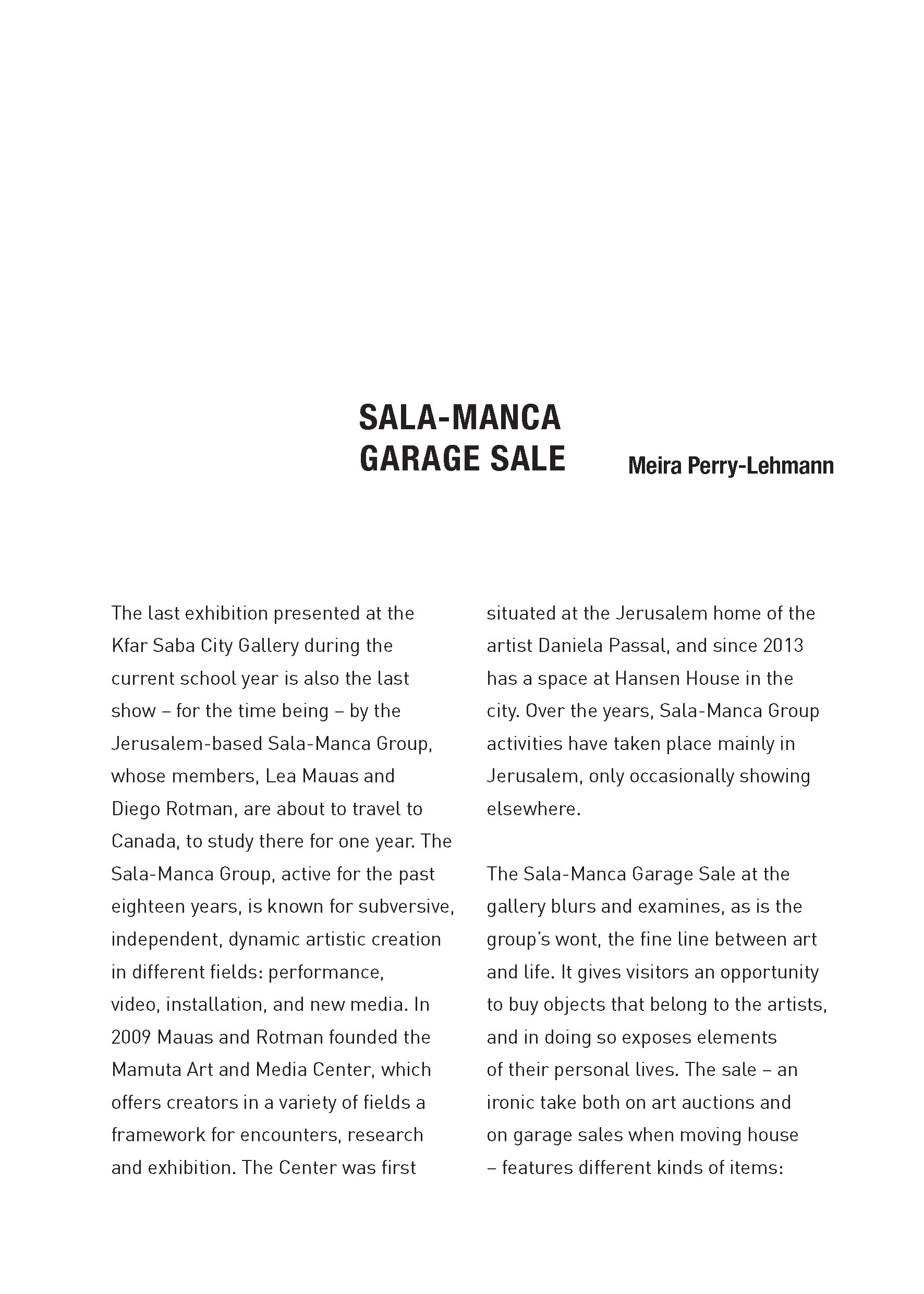