From the beginning of the 20th century, Zionism visually represented ideologically charged Eretz Israel (Palestine), showing the local landscape as an idealized continuation of the biblical landscape. Until around 1970, Jewish Israeli art constructed an ideological representation of  “the own territory”, “the own landscape” where the Palestinian population was not represented at all, or became literally a part of  the landscape. Since 2002 with the beginning of the construction of the separation wall by the Israel government, a new border is being defined and a new landscape is being created.
The construction of a new form of landscape, which has the aim of hiding the view of the separation wall, is being tested in Maavar Hazeitim (The Pass of the Olives), situated in Al-Azaria area, near Mount Scopus, Jerusalem. A pastoral and “natural” name is intended to conceal the fact that a weird terminal serves as a check-point. In this part of the wall the construction of a façade, of a Potemkin Village1, is being tested along the “border”, in order to prevent the Israeli citizens from seeing the wall. But the use of landscape construction, through painting and reliefs, is not only intended in this case to create the idea of a peaceful wall, but to make the wall disappear. You can see mountains, flowers, pastoral images, and also the facades of Jerusalem stone houses with windows which do not overlook any where.
In this project Sala-Manca deals with the use of political created landscapes, with these new forms of art-ificial or art-official and naïves landscapes, created in a very non-naïve platform. The platform is the message, and the naïve landscapes the decadence of an official aesthetics of colonialism. The first steps of a new fake as a way of living proposed by the Israeli state to its citizens.
Prof. G. Vakulinchuk
Sukkat Netsach (Eternal Tabernacle 1)
Produced in the frame of Liminal Spaces project curated by Galit Eilat, Reem Fadda, Eyal Danon and Phil Misselwitz. Exhibited at GFZK, Leipzig, Germany, 10.2006-1.2007
The holiday of Sukkot is one of the three holidays mentioned in the Torah on which it was customary to go on pilgrimage to Jerusalem during the period of the First and Second Temple. The name of the holiday comes from the word Sukkah – the name of the huts in which the Israelites encamped in the desert during their exodus from Egypt (Exodus 33:6). 1 The holiday’s relation to Jerusalem acquires additional meanings in the Bible when several of the prophets refer to the city using the term “Sukkah” – see, for instance, Isaiah (1:8) and Amos (9:11). 2 The holiday commemorates the exodus from Egypt by means of the commandment to build sukkot (Leviticus 23:42) – temporary structures topped by a covering of branches or fronds. During the holiday, one’s house become a “temporary residence”, while the sukkah becomes a “permanent residence”. During the holiday, Jews are commanded to sit in the sukkah, and to eat, study and even sleep in it during the seven days of the holiday. One of the central customs related to the holiday is the decoration of the sukkah; these decorations lend it a festive air and are a means of expressing the identity and ideological outlook of its builders. In the ultra orthodox community, dominant motifs include  rabbinical figures; the seven ushpizin, or exalted guests, who are symbolically invited to the sukkah; and various religious symbols. Members of the national-religious community adorn their sukkahs with decorations that have a national character, such as images of the local landscape, its fauna and flora, and the Israeli declaration of independence. Jerusalem and related symbols are always central motifs in sukkah decoration. The sukkah symbolizes the tension between a permanent residence and a temporary residence – between “the ancient ideal of wandering referred to by the symbols of the holiday and the ideal of permanent residence, which is at the core of Zionism”. 3 Eternal Tabernacle4 is composed of materials typically used to construct a sukkah in Jerusalem: an aluminum framework that is easy to construct and to dismantle, a prefabricated covering and other do-it-yourself-style paraphernalia. The cloth walls surrounding the sukkah are made of water-resistant material, which is frequently used to surround the modern sukkah. In many sukkahs, symbols and motifs related to Jerusalem are imprinted upon this cloth. The motifs we used for the walls of Eternal Tabernacle are taken from an area of the separation wall in Jerusalem. This area, which is called the “Olive Pass” was decorated by Akerstein Industries. The decoration of the wall was commissioned by the Ministry of Defense, in an a?empt to explore the possibility of artificially “beautifying” the separation wall and thus dissimulating its presence on the Israeli side. Thanks to Itay Weiser, David Mauas, Mery Goldwaser, Hagar Goren
1 The place name Sukkot is first mentioned in the Torah when Esau and Jacob go their separate ways; Jacob built a hut, or Sukkah, and named the place a?er it.
2 See G. Hasan-Rokem, 1997.
3 Ibid.
4 Eternal Tabernacle is a paradoxical name that expresses the tension between temporary and permanent residences. It is the name of one of the companies that builds and dismantles sukkahs.
Sources:
1. G. Hasan-Rokem, “Representation and Dialogue in Folklore Research: The Poetics
and Politics of an Unperformed Festival,” Jerusalem Studies in Jewish Folklore,
19–20, 1997–1998.
2. G. Vakulinchuk, “Studies on New Israeli Landscapes – Notes for a Project by Sala-
Manca (Jerusalem),” unpublished manuscript.
3.www.wikipedia. org
Ephemeral Territores at “New Territories” | De Hallen, Brugge – Belgium | Curator:  Michel DeWilde 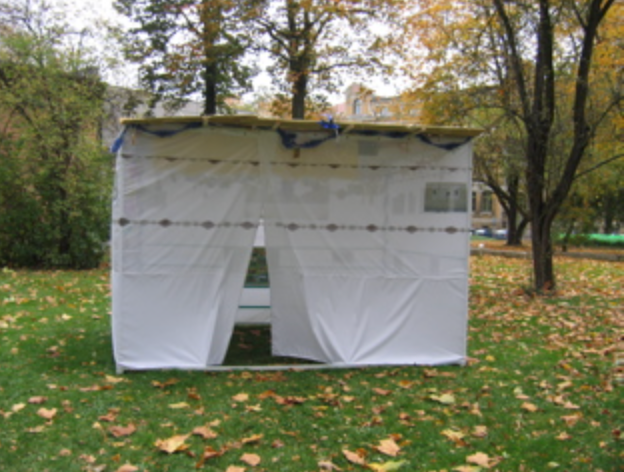 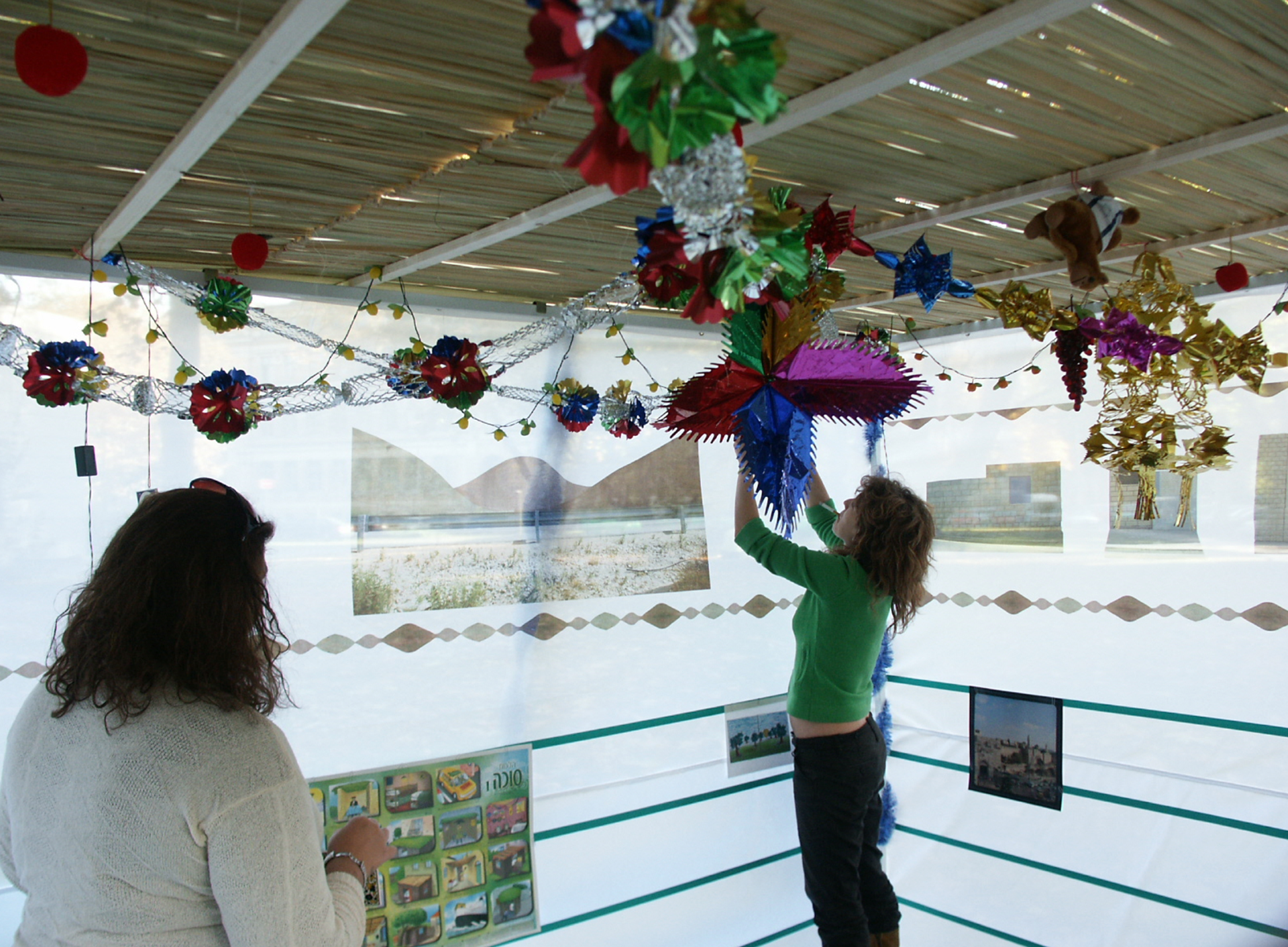 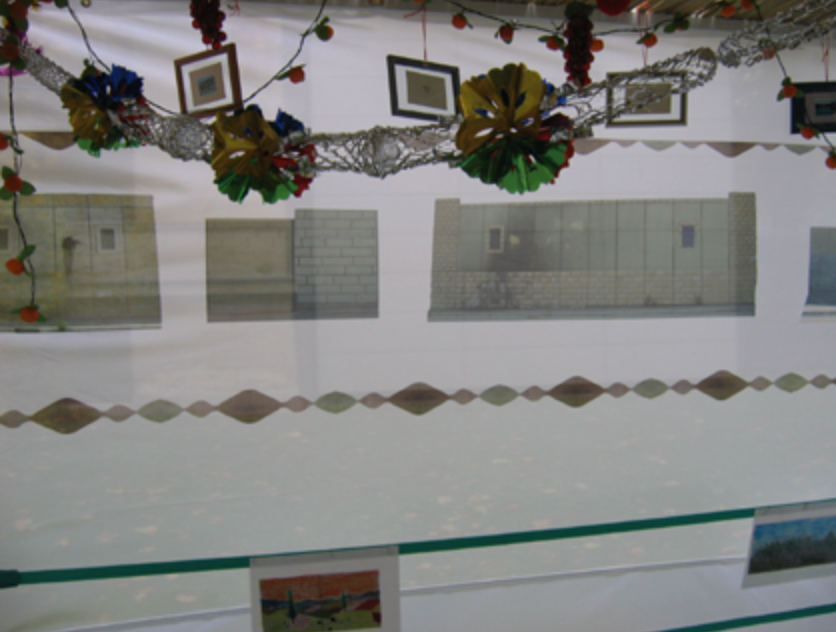 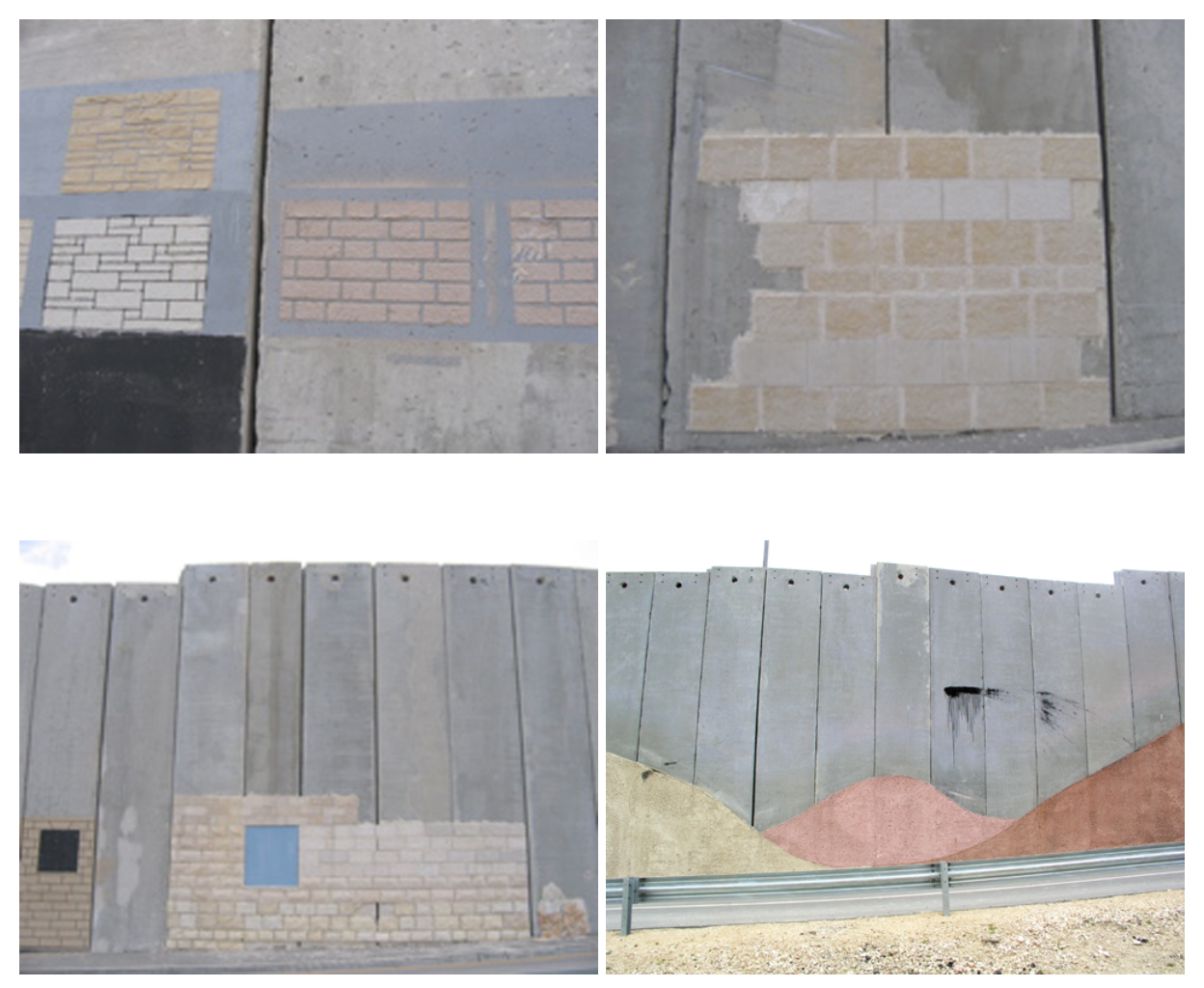